Welcome to the last new game releases of 2022. December is usually a slow month for game releases but we bring you 2 new titles to dig your teeth. And if you thought you had enough presents for Christmas already, we also dive back into 3 games released earlier this year. And trust us, you really don’t want to miss playing these titles before the end of the year. We’re already excited for what 2023 has in store, but we want to end 2022 with a bang!

So, we wanted to end the year with some Christmas spirit, thus we created a top 5 games to get you in the mood. And while ‘it’s Christmas Time, there’s no need to be afraid’… that is unless you’re playing the horror title The Callisto Protocol. You really don't want to be Home Alone while playing this game! Fancy something a little less spooky, then race around in Need for Speed Unbound rather than racing around trying to get the Christmas shopping done. If you would like something more tropical, with some warmer weather, try Horizon Forbidden West for A California Christmas. Let the Reins begin! 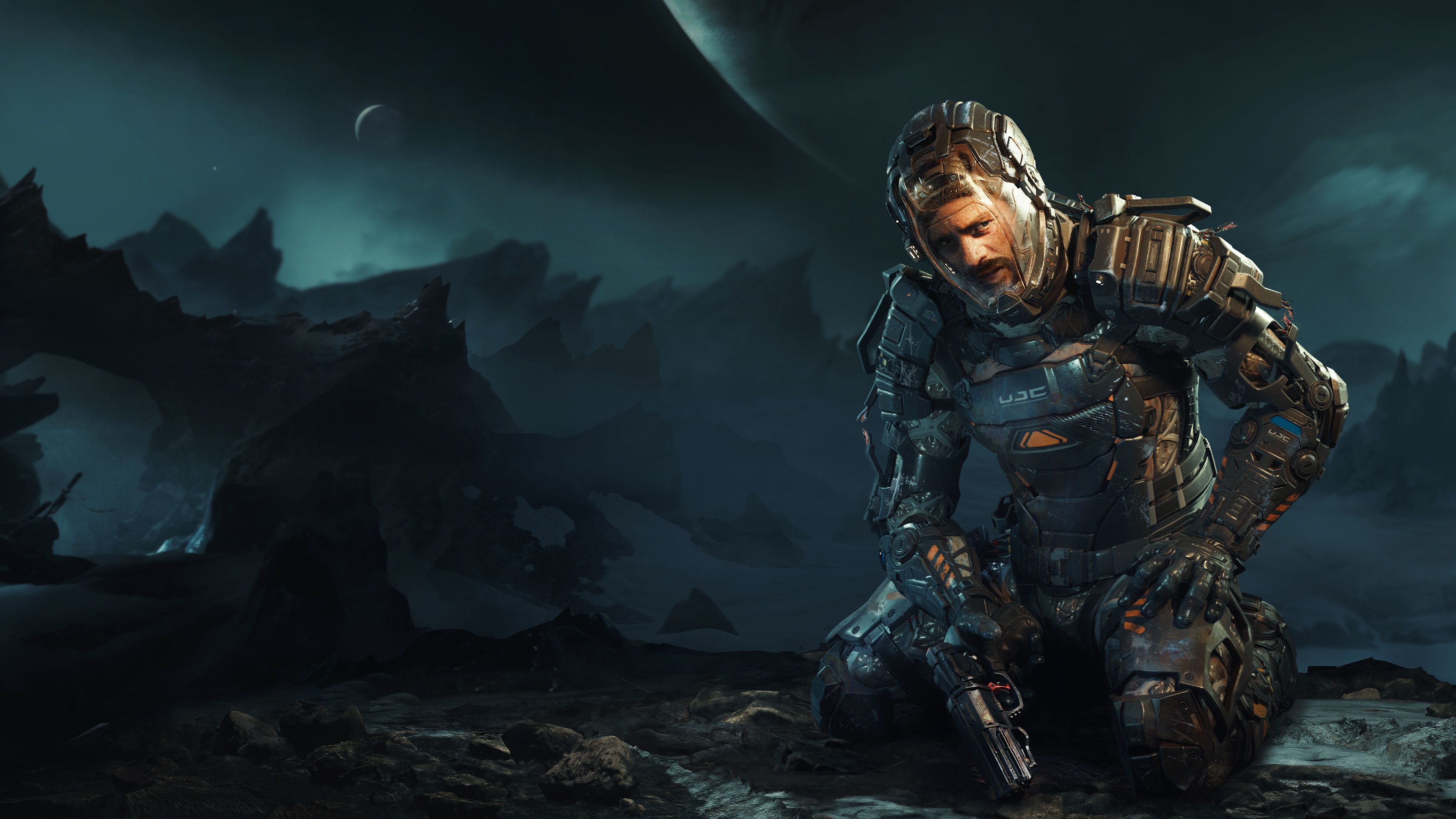 Survive the dark and cold winter with The Callisto Protocol

As mentioned before, you don’t want to be be Home Alone when you are going to play The Callisto Protocol. Step into winter nights with this dark and cold themed game. With Glen Schofield, co-creator of the Dead Space series, as director, you won’t have a Silent Night over the holidays. Explore the depths of fear in this survival horror game and escape from terrifying threats. After playing, you will be fully prepared to survive this festive season. This game receives a big 5/5 to get you in the Christmas spirit!

The Callisto Protocol brings back memories of Dead Space. It has the same vibe of always feeling tension, this time in a cramped, dark prison. You are imprisoned on Jupiter’s moon Callisto and you have to escape a montrous alien invasion. Along the way, you will unravel this moon's dark and disturbing secrets. 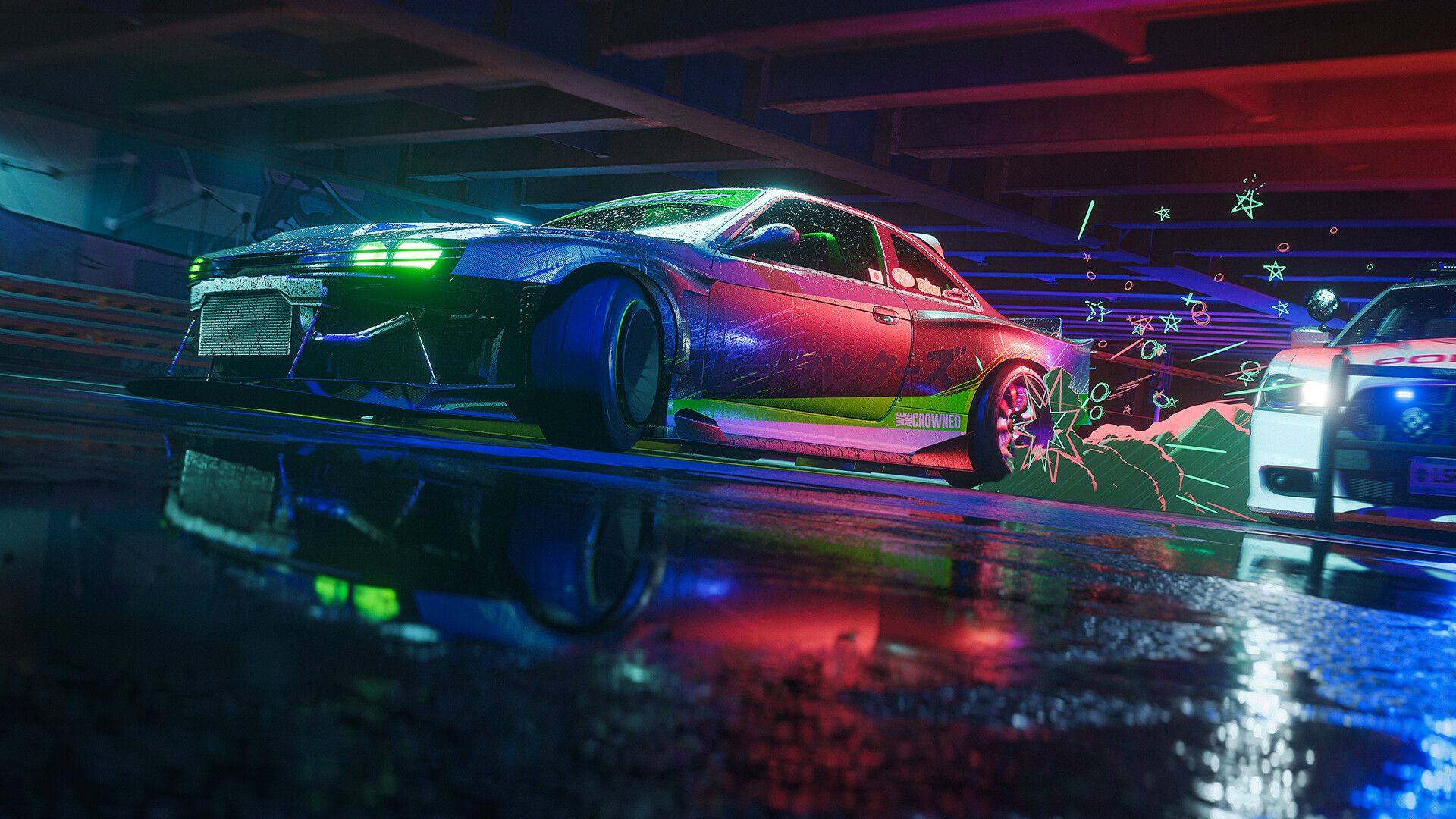 Drive into Christmas night with Need for Speed Unbound

Cruise into Christmas with Need for Speed Unbound. This new release will allow you to practice your driving skills while the roads outside are icy. Not only can you style out your cars in Need for Speed Unbound, but you can also express yourself with fashion pieces from the world’s most influential brands. Heat ;) up your Christmas with NFS and Sleigh Ride into the night.

NFS Unbound is the long-awaited sequel of Heat, which was released some 3 years ago. In Unbound you take to the streets of Lakeshore with illegal street racing, speed raves, online events and more. Street racing is all about ego, so you will have to flaunt your cocky side with loud engines and even louder nitrous bursts. Still not loud enough? Turn up the volume with music from artists like A$AP Rocky, Mura Masa, Lil Yachty and Bicep. With A$AP Rocky featured on the game cover, he influences the game in more ways than music. There are elements of fashion and style that scream A$AP Rocky adding to the strong visual identity of this title.

Of course, it wouldn’t be Need for Speed if you didn’t have to outrun the cops. And these exhilarating cop chases will send your pulse through the roof. They are not for the faint of heart! 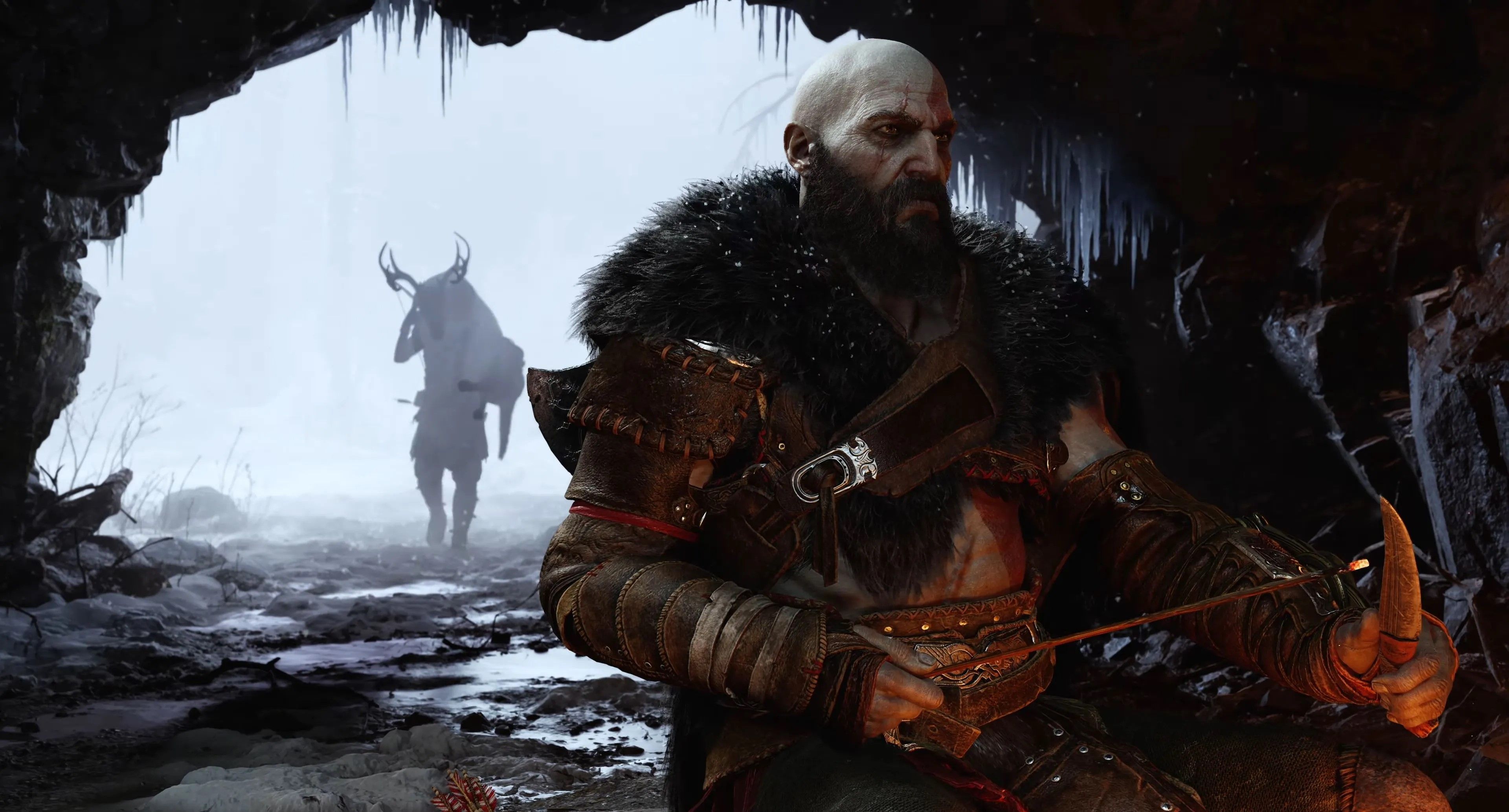 God of War Ragnarök will give you a white Christmas

When playing God of War Ragnarök, just squint your eyes, think of a white beard, and Kratos can pass as Santa Claus. Besides that, you will spend a good amount of time wandering around in snowy Norse areas. So this game already gives you the perfect Christmas spirit. And while your weapons in the game come with elemental forces, like ice and fire, the dream of a white Christmas and cozy heat from the hearth (read: Kratos’ fiery Blades of Chaos) comes true… in a way.

God of War Ragnarök is the sequel to 2018’s God of War. Kratos and his son Atreus further explore the remaining nine realms of Norse Mythology in Scandinavia. The end of times, called Ragnarök, is about to happen and the two protagonists need to prevent this event. You will have to fight your way through a diverse cast of enemies, bosses and even Gods. The game is critically acclaimed for its storytelling, visuals, level design, characters, and overall improvements to the gameplay of the previous game. 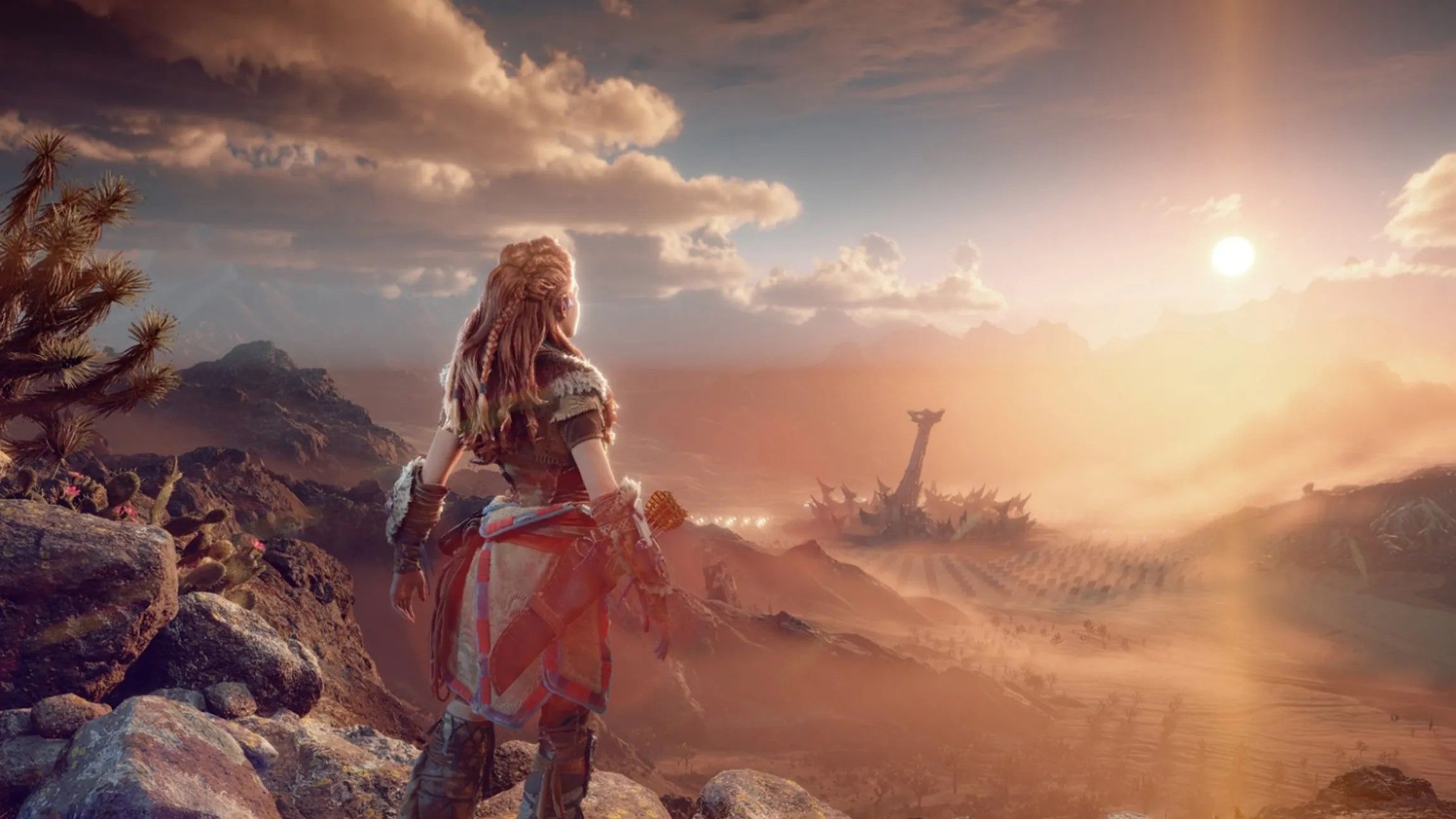 Winter is coming! Get summer vibes with Horizon Forbidden West

Are you done with winter? Horizon Forbidden West will definitely get you in the summer mood. Well, at least if you stay in warm, sunny areas. Don’t give the protagonist Aloy thick armor, but try an outfit with at least headgear to protect her from the sun. Override a machine and ride through the desert landscapes, or chill on tropical beaches to watch the sunset. Sunglasses on, a (virgin) piña colada by your side and Forbidden West is the best way to escape real-life winter.

Horizon Forbidden West continues the story of Aloy, a young Nora hunter who has to find the source of a mysterious plague that kills all life on earth. The west of the United States is your playground and while you visit iconic landmarks, you encounter new deadly machines and tribes of nomadic raiders. Armed with new weapons and gadgets, you uncover the truth of our planet’s threat. 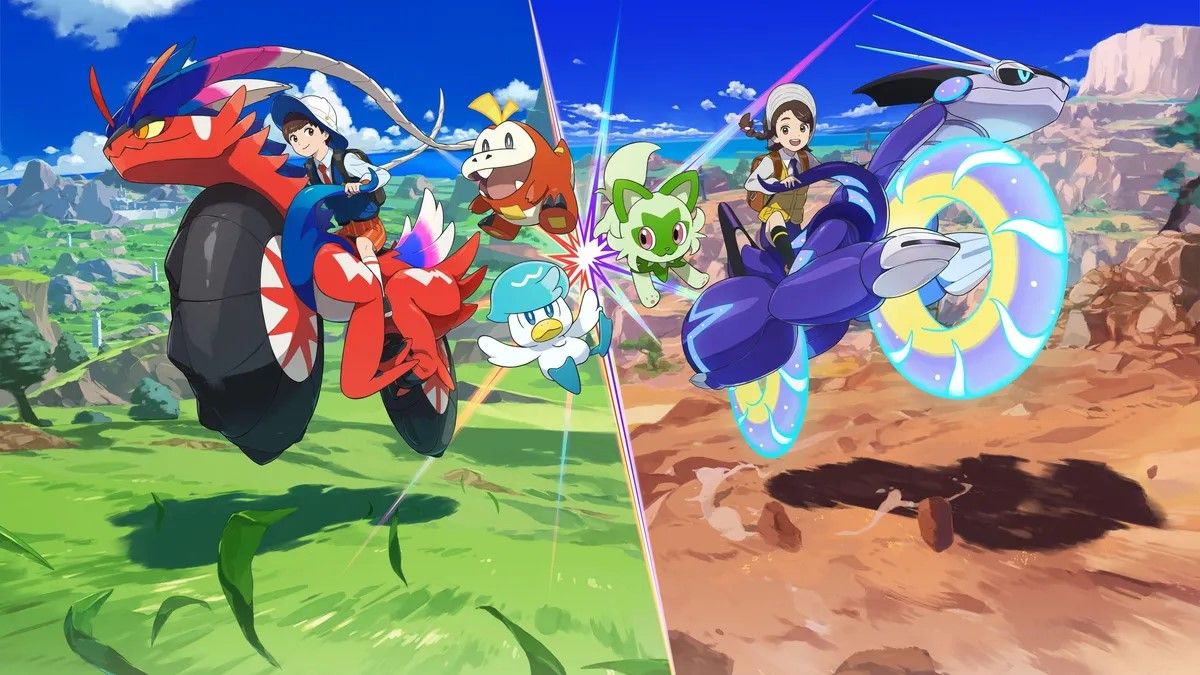 Cuddle a blanket and catch 'em all in Pokémon Scarlet & Violet

Christmas Eevee is approaching, and Pokémon Scarlet & Violet is out and ready to be played by you. Leave behind the cold, brisk winter weather and escape to the sunny shores of Paldea as you immerse yourself in this stunning Pokémon world. Remember, this is the first open-world RPG Pokémon game so truly getting lost in this world is definitely an option. What are you waiting for, grab the newest title and discover new Pokémon like Koraidon, Armarouge, Lechonk and Great Tusk. I know I will be singing ‘All I want for Christmas is Mew.’

It must be said that Pokémon Scarlet and Violet do come with some issues. Most notably, the frame rate and texture pop-in. Despite this, we still think it is a game worth playing if not only for the colorful open-world that really feels never-ending. On top of this, The best thing about Pokémon is the Pokémon, and with 400 of them to discover, train and play with, the variety alone will keep you coming back for more. Open-world battles are great and make targeting specific Pokémon for capture much easier.

Other 2022 Games for Christmas worth mentioning

‘It’s Beginning to Look a Lot Like Christmas’ and the game selection we have provided is surely going to feature on your Christmas lists. Whether you want to escape the winter woes with the sunny landscapes of Horizon Forbidden West or Pokémon Scarlet and Violet. If you’re more of a ‘Let it Snow.., Let it Snow.., Let it Snow’ person then God of War Ragnarök with its snowy landscapes and amazing gameplay will be right up your alley. That is the final game release article of the year 2022. And of course, if you are in need of some game credit or a gaming gift card this Christmas, you know where to find us. We wish you a Merry Christmas and a Happy New Year. Over and Out!