How to Get Started in Metal: Hellsinger

Rhythm games are back! And one is definitely worth mentioning, Metal: Hellsinger, from Swedish developer The Outsiders. But don’t get it twisted, this game goes far beyond playing instruments in Guitar Hero, Rock Band or Rocksmith. Welcome to first-person shooter paradise mixed with heavy metal. With The Unknown, a part human, part demon creature who is obsessed with vengeance, you’ll run through eight levels of Hell containing heavy metal tracks specifically created for the game. With vocals by metal icons such as Serj Tankian (System of a Down), Matt Heafy (Trivium) and Alissa White-Gluz (Arch Enemy), fans of the genre are gonna have a bangin’ time playing this game.

But where does one start when it comes to diving into this Hellish musical journey? If you’re new to this style of game, don’t worry. We played it and gathered three of our best tips for starting with Metal: Hellsinger. Let’s go!

Metal: Hellsinger is a rhythm FPS, meaning you have to shoot on the beat. This will directly impact the level of damage you deal, and affects how cool the music sounds. The more in sync you are with the beat, the more destruction you cause and the better the music that blasts through your speakers. This is measured through the Fury meter, a score multiplier. For every level, you start with 1x, but the more kills you make and the better you stay on the beat, the multiplier goes to 2x, up to 16x. Each Fury tier adds more complexity to the music, adding vocals when you finally hit the 16x. It is important to keep a high Fury because it determines how many points each kill is worth, how much damage your weapons will deal and of course, the epicness of the music. And, the more points you earn, the higher you end up on the online leaderboard, leaving your mark for the world to see.

So, learn the rhythm of every song by using the moving arrows in the middle of the screen to master the skill. But if you lose the beat, keep an eye on the background. The game’s environment is there to help as well, like the flames that pop up on the beat. Give yourself time to get used to every weapon or choose a favorite. Every weapon has a different time frame in the beat. You’ll really feel euphoric when you reach a streak and smoothly run through an entire level. Keeping you coming back for more. And when you deal enough damage to an enemy, it starts glowing, building suspense. This means you can melee strike it on the beat with your sword to receive some health. You’ll also build up to a finishing move called “Slaughter,” which inflicts massive damage. So basically, in every aspect, keeping up the beat is essential to succeeding in the game! 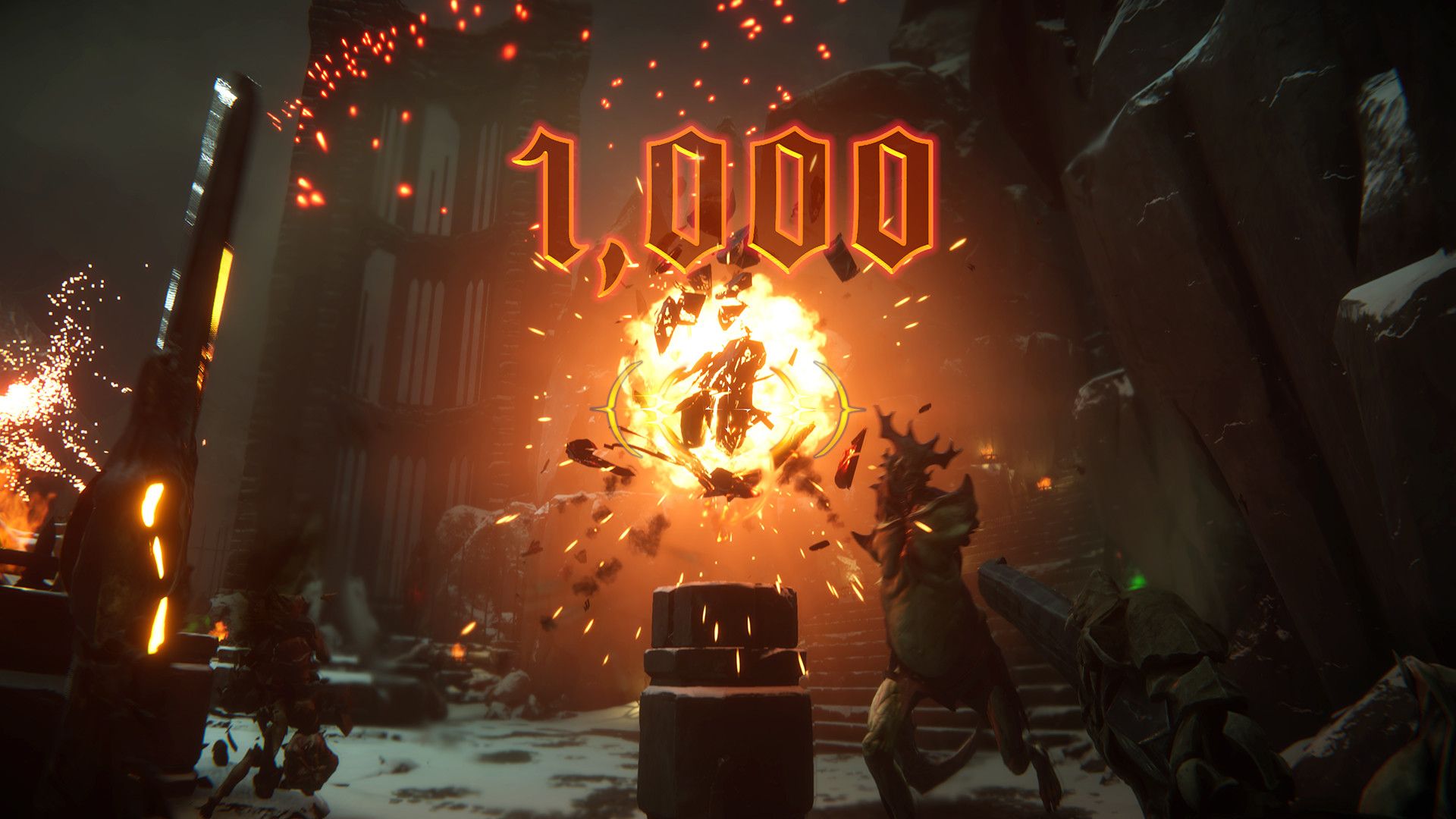 The second tip we have for you for a perfect start in Metal: Hellsinger, is to just keep moving! When you master the beat and master the movement, you are on your way to major win. This game is not really forgiving and it definitely took inspiration from the DOOM franchise. Enemies will surround you from every direction, shooting different kinds of ammo straight toward you, like balls of fire. But, they’ll also run towards you to punch you in the face. So if you think you can stand still and kill them safely from that spot, you are sorely mistaken and will be dead in no time. The demons will quickly overwhelm you and you are done for. A better strategy is to focus on one enemy at a time to kill, although be aware of your environment and always try to be aware of where the other enemies are located to avoid some nasty surprise attacks.

Keep in mind, depending on the difficulty level you choose, you have three, one or no resurrections available. This means that if you die, Hell can bring you back to life, costing you some points. When you are out of resurrections, or just die once on the highest difficulty mode, it’s immediately game over. You will have to start the game from the very beginning. This tough gameplay can become infuriating, and that is why Metal: Hellsinger is not for everyone, but if you keep moving, continue to jump around, use your dash and special attacks, it can save you a resurrection and you’ll stay in the game. 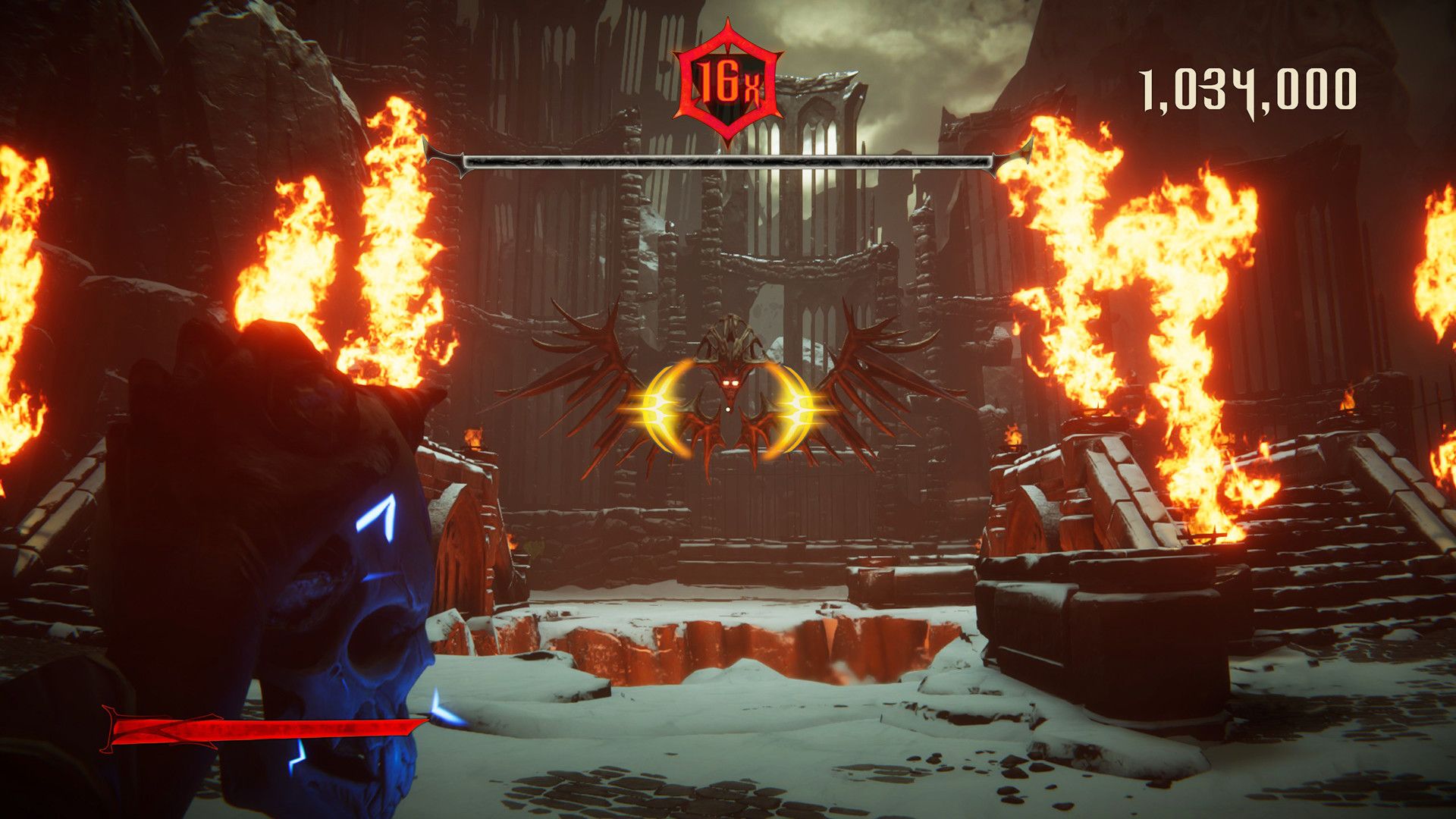 3. Give them Hell with Paz

The last one is about Paz (narrated by Troy Baker), a skull you receive early in the game. He is a weapon himself. He is your Angel, because he is there to give damage to enemies, but also to keep the Fury multiplier bar sky high! Paz fires a single ball of flame, of course on the beat, to get perfect scores, which will fill up the multiplier. This works the same as with the other weapons, but this skull has one benefit you’ll love. With the other weapons, you actually have to hit an enemy to fill up the Fury. But if you just keep shooting on the beat with Paz, it fills up the bar to multiply your points. Even without hitting anyone. In that case, you can keep up metal to the max in between fights and keep max damage on your weapons.

Enter Hell and slay some demons

Now, you’ve got the tips and tricks you need to enter hell in Metal: Hellsinger. You will have a hell of a time slaying some diabolical enemies, facing bosses and jamming out to the metal, all in rhythm, of course. We had a blast playing this game. While it sounds dark, it feels refreshing and it has replayability value if you want to master the rhythm skill, or if you want a more challenging experience on a higher difficulty level. It’s really for you if you want something new, a fresh look on rhythm games and of course.. metal music! Think you’ve got what it takes? Grab some credit for PlayStation 5, Xbox Series X or Steam and get slaying!