3 Things to Keep in Mind With Gotham Knights

Batman is dead. Oof, that’s a hard-hitting start for Gotham Knights. But without this event, this game probably never happened. Because with Batman being gone, it’s up to Nightwing, Batgirl, Red Hood and Robin, a.k.a. the Bat Family, to protect Gotham City from its criminal activities. So, what are the things to keep in mind for this game, and what do you have to take in account? We listed three points we found most important. (Spoiler: it’s not an Arkham game!)

Each of the four characters in Gotham Knights has their own fighting style, abilities and skills. For example Robin is specialised in stealth, while Red Hood is the brawler you need. You can choose each character at the beginning of the game, and you can easily switch characters while being in-game. This system has been thought through and works very smoothly. And even if you choose to stick to one superhero or try out multiple ones, keep in mind to unlock their Knighthood skill tree as quickly as possible. This fourth skill tree is unlocked if you complete Knighthood Challenges appearing on the Batcomputer after your first night patrol in Gotham.

It will take some time, and multiple nights, to unlock the skill tree, because you have to work for it. First you need to interrogate criminals that at some point give you access to premeditated crimes - side quests you can do the following night. After completing these, and you level up a few times, you should have enough points to spend on the skill tree. Besides new skills for combat, Knighthood also unlocks the Heroic Mobility skill, which makes it far easier to traverse Gotham City. Each character has its own mobility skill. Robin’s aerial traversal includes short-range teleports, Batgirl can glide with her cape, Red Hood has energy platforms to jump on in the air and Nightwing has a drone to fly around with. Combine it with the grappling hook and you travel in style through the city. 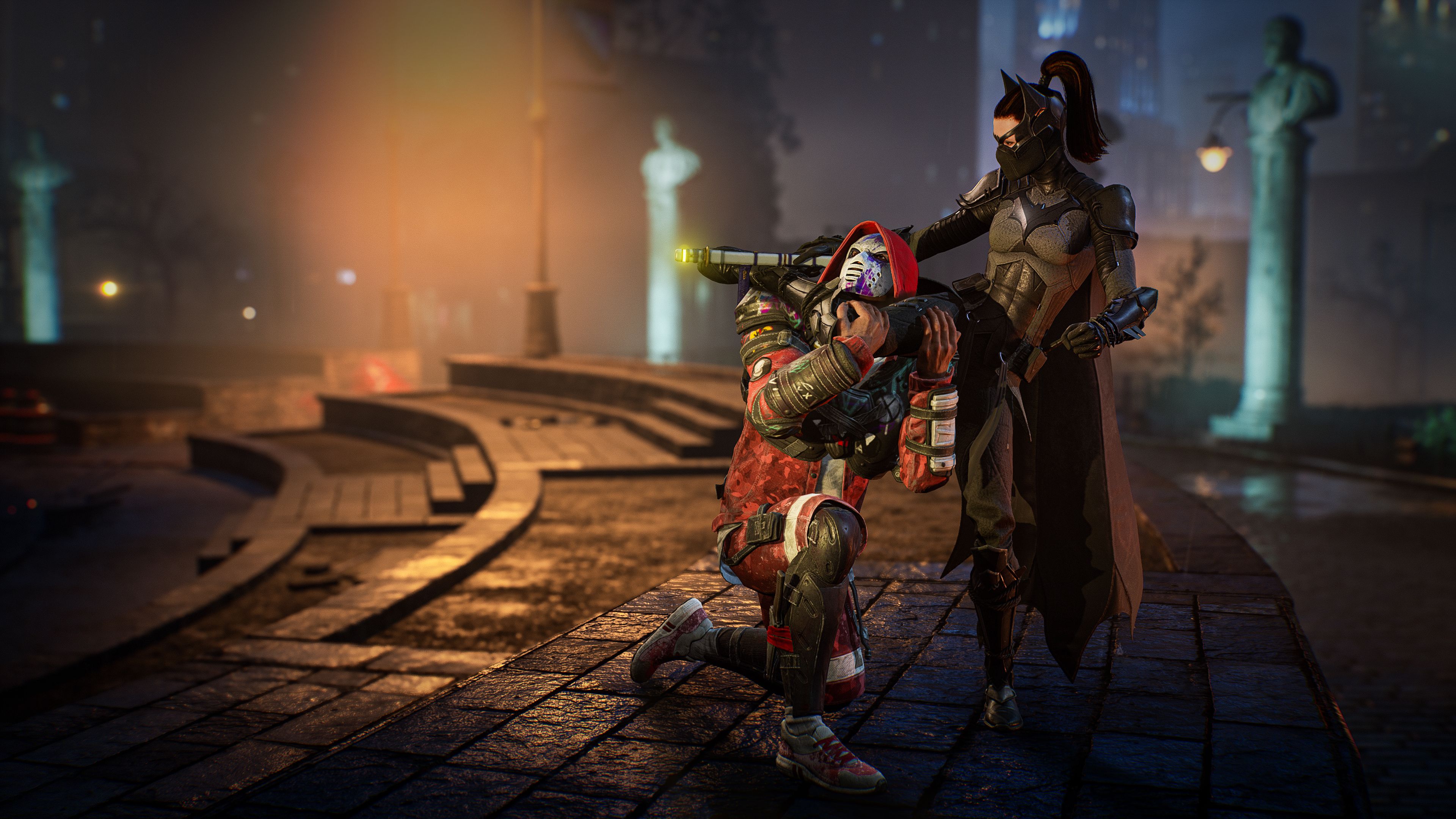 2. Craft new gear after each night

Spending the points you earned after levelling up your character is nice and all, but keep in mind to upgrade your gear after each night you spent in Gotham City. By doing quests, defeating enemies and looting chests you will randomly receive Blueprints and Salvage; the things you need to get access to craft new gear at Belfry, your secret Knights-hideout. Every level contains multiple gear assets to craft: suit, melee and ranged. Upgrading these elements is important, because the more progress you make in Gotham Knights, the tougher the enemies.

It is nice to see the RPG-ish way of choosing gear. You get lots of options and with this you can create your own combat style. By adding mods, you can add different (nature) elements to your weapons, like ice and poison. Putting these on your character also upgrades its power level, so you will be stronger against enemies as well. Fun fact: you are not stuck with the suit you craft, luckily you can still choose the look of your suit of your preference and keep the upgrades you just crafted. 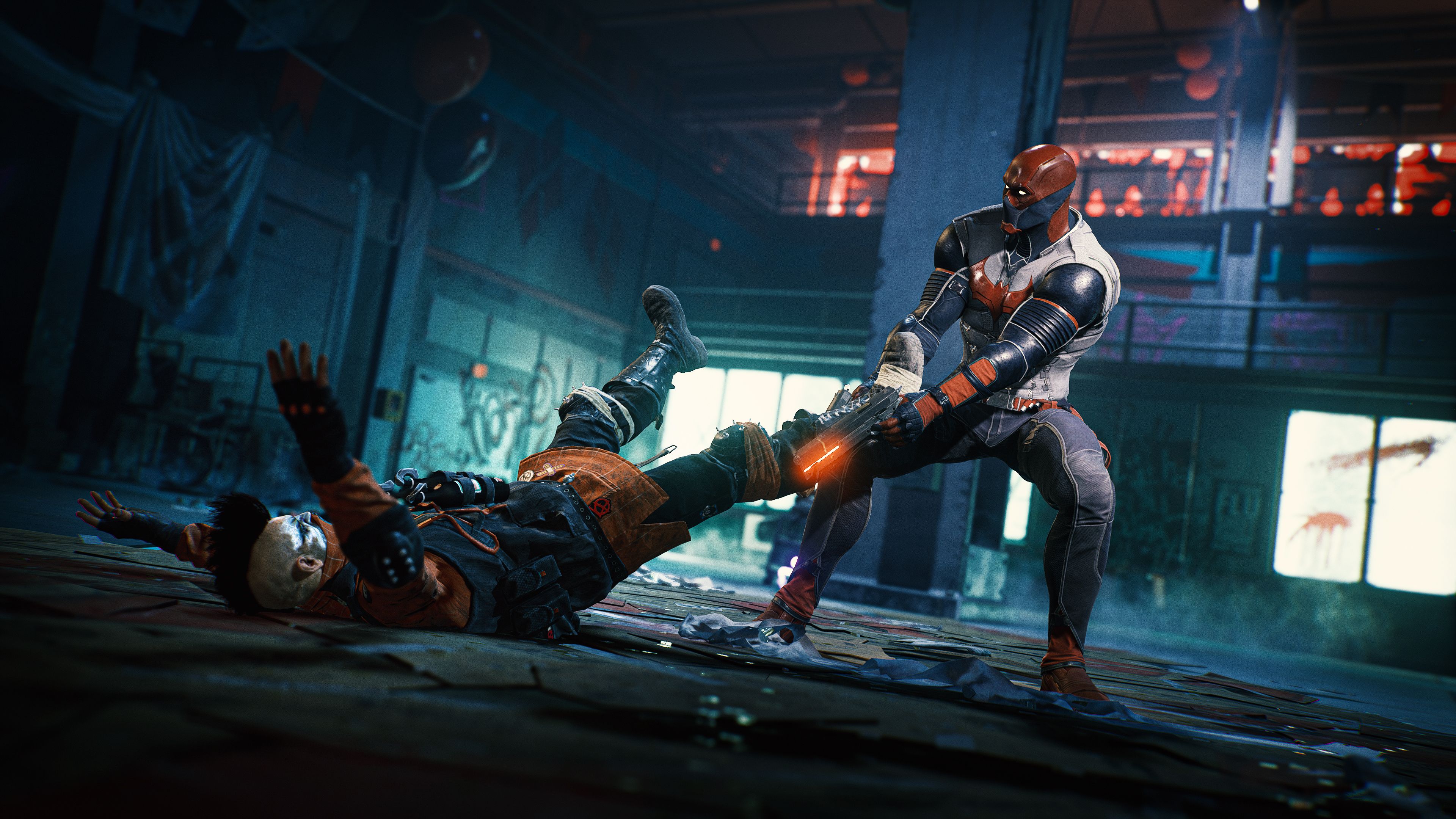 3. Gotham Knights is no Arkham

We are seeing a lot of comments from people who compare Gotham Knights to the Batman Arkham series, from developer Rocksteady. Especially the last one, Batman: Arkham Knight. Please, don’t. Yes, a lot of us gamers loved to see a spiritual successor of these Batman games, but this has never been the case. Developer of Gotham Knights, WB Games Montréal, indeed developed the Arkham spin-off Batman: Arkham Origins, which felt a bit bland between the others.

But Gotham Knights? It’s a totally different game. Of course it contains a piece of Batman, although the whole atmosphere stands on its own. We also expected a bit more of this game, taking the quality of the DC-games in our mind. In this iteration, Gotham City feels less lifely, the combat is not as smooth as you might expect and your bike feels slow. Other than that, the story is great, with (in)famous characters like Alfred, the Penguin, Harley Quinn, and the Court of Owls. And you can seamlessly switch between characters, that gives you deeper gameplay and much more replayability. Also, this game is built for co-op and as smooth you can switch characters, your friend can drop in and drop out whenever they want. With only a few hiccups and gameplay glitches, Gotham City is way more fun playing together through the story, side quests, loads of challenges and finding collectibles.

With these tips, and things to keep in mind, the door is open to start Gotham Knights prepared and with a fresh view on PS5, Xbox Series X/S or Steam. Unlocking the Knighthood skill tree and upgrading your gear are starting points to make the game a little bit easier and more dynamic for you. The skill tree(s) will help you unlock stuff and diversify the combat, while the gear makes you more powerful against enemies. Going into this game with the mindset that Gotham Knights isn’t an Arkham game, will (hopefully) bring you joy the game deserves. We know it has some flaws and sometimes we were dreaming of a smoother gameplay and more bombastic presentation. But, play this as a new game instead of comparing it to the Batman ones. Because if you like DC and Batgirl, Nightwing, Robin and Red Hood taking over the role of the Bat Family, then you’re going to have a good time.